Don’t be afraid to overwrite your drafts. Revision and editing will sculpt the story into a publishable form. The better you understand your characters and their story, the better your book will be. Know that backstory but feed it sparingly through the story. Understand what happened to make your characters the people they are when your story starts. Know why their mother and father fought and why their grandparents died.

Just as the iceberg you see is merely the tip of a very large underwater berg, the published book is often just like it. The reader has only the book before her, yet it will be obvious that you know it all. Those 800 invisible pages are there.

There are many reasons to write down the thoughts in our hearts and heads.

When I was a child we moved around a lot. My mother, poor woman, told me that she moved 26 times in 23 years, in the latter years with up to seven children in tow. Letter writing was something we did because we loved receiving letters. Mum and her family wrote and received letters addressed to “Dear All” which were circulated to keep everyone up to date with the news. But they were nothing like receiving a letter addressed to me personally, so I wrote quite a lot of letters to various friends and family.

Putting pen to paper makes you focus on the subject at hand. Often, when I’m confused, I go to pen and paper in order to work out what I feel, what I want and how I can achieve it. There’s something about the act of dragging a pen across a lovely pristine piece of paper which forces you to think deeply, drawing up from the heart what normally hides there.

Writing a book, telling a story and following a theme, asking yourself “what if” also has the same effect. It can also fire up the imagination, often resulting in the legendary 3am epiphany.

Until you can explain something, I’ve been told, you don’t fully understand it. Ideas and concepts are like that. Especially early in their careers, writers need multiple drafts and rewrites to refine and clarify their stories and even then, sometimes what ends up on the page surprises the writer as much as the reader.

Ain’t that the truth! 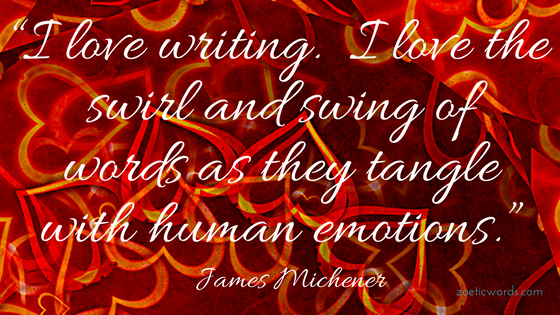 Whichever point of view you are using, keep the ‘camera’ close inside the character. Avoid anything which puts distance between the character and reader. For example, what do you feel when you read “It was raining, hard”? Anything? If you love rain your imagination may take you there, but it may not either.

“Raindrops pelted down, bouncing on the concrete path, stinging, bruising the skin on her arms between goosebumps raised by the cold. Rivulets gushed down over her face and hair and, as she drew in a deep breath saturated with that distinctive smell of dust settling, she felt laughter bubble up and burst free. Raising her face to the sky, she revelled in the knowledge that the long drought was broken.” 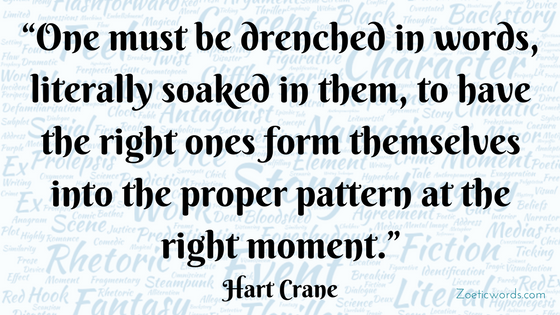 Dedicated to all the NaNoWriMos particicpating in the official National Novel Writing Month.

Welcome to my world, a wonderful world of words; zoetic words, lively, vital and animating.